My Other Island Home… 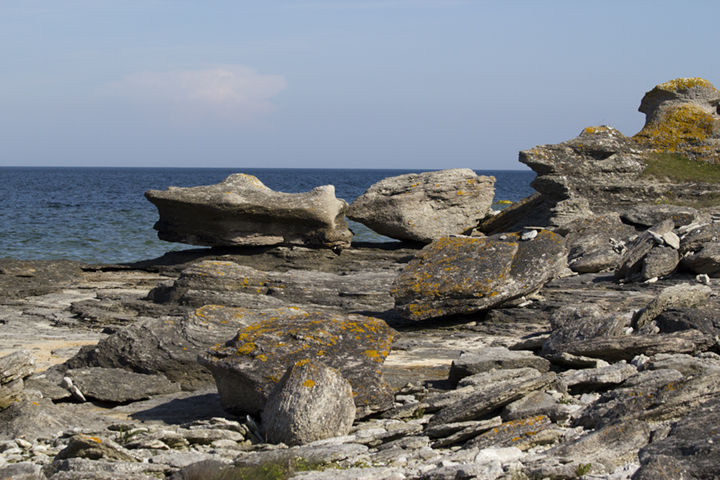 I am back from my month-long stay as an Artistic Fellow at the Ingmar Bergman Estate, on magnificent Fårö (small island on top of the beautiful Baltic island of Gotland). And yes, I admit it was very very hard to leave…

Gotland of course is the setting for both The Hall of Tyr and Tindr. It is a place I love, and a place I know increasingly well. The opportunity to live and work for a full month at the Bergman Estate was simply wonderful. There is no other word for it.

What was I doing? Most importantly, beginning Book Six. And with my trusty film crew shooting footage for what I hope will be three worthwhile short videos about Gotland’s beauty and history, coming soon.

I also had the honour of presenting a talk, “Scandinavian Archetypes in North American Imaginations: From Beowulf to Alicia Vikander” at Ingmar Bergman’s private, 15-seat cinema to my brother and sister artists, and a few select friends. (And 500 sheep outside the door.)

My fellow artists were almost all Swedish, a brilliant and diverse mix of theatre directors, journalists, filmmakers, biographers, and mixed-media artists. Friendships were made. Good work was done. Incredible walks were taken. 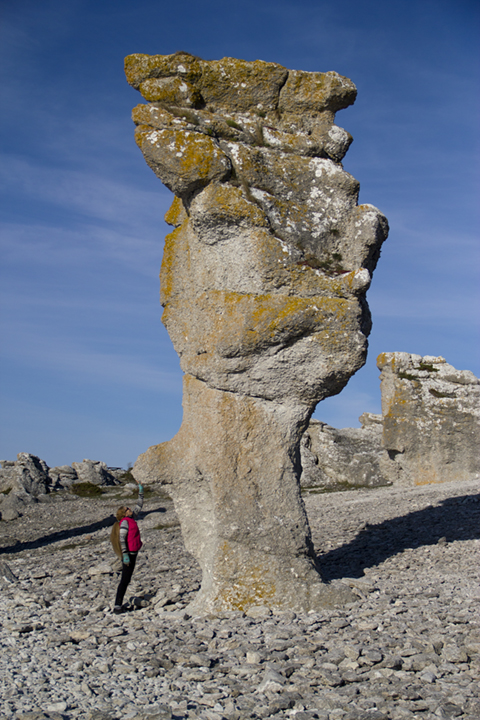 That’s me reaching up to touch the “nose” of this rauk at Langhammars on the West Coast of Fårö. It gives an idea of how vast this limestone sea stack is.

The forest and sea landscape of Fårö. 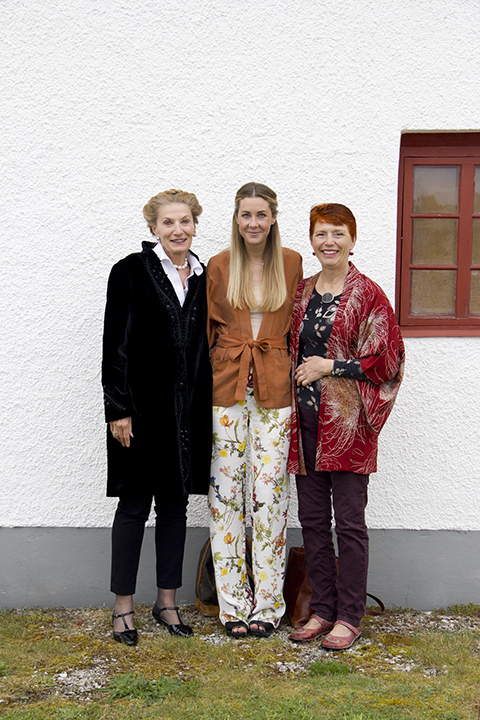 At Bergman’s cinema before my talk, with dear friend Liv Berntsson (aka “Reflector Girl” – the deadliest hand with a photographic reflector ever) and Luella Godman (AirBnB host last year, good friend this year) 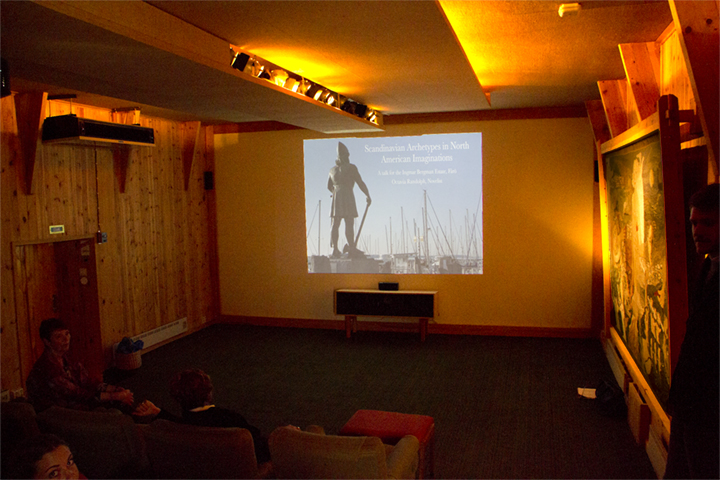 The interior of Biografen, Ingmar Bergman’s private cinema, before my talk. Biografen was the place that held the world premier of Bergman’s “Magic Flute”, based on Mozart’s opera. 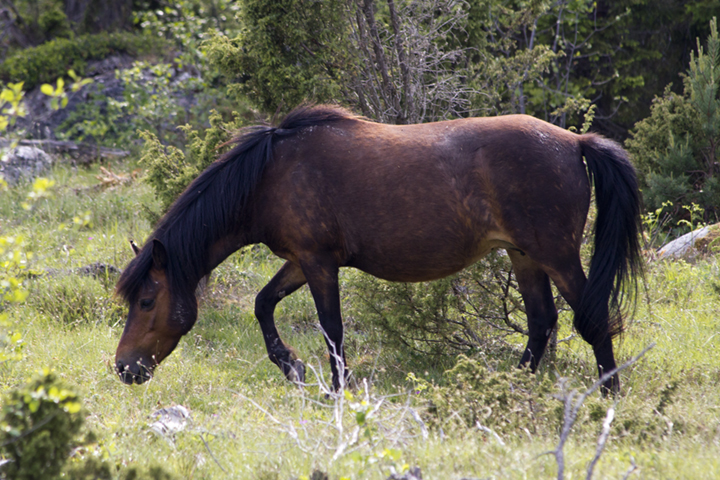 Gotlands Russ Mare – wild forest ponies of the island. They live in the forests of Lojsta hed, south of the centre of Gotland, and frequent the adjacent Wildlife Sanctuary. We found a group of dams and foals at the edge of the woods in the sanctuary. To keep the herd sustainable, a percentage of the young will be captured and tamed and sold to lucky Gotland children as beloved pets. 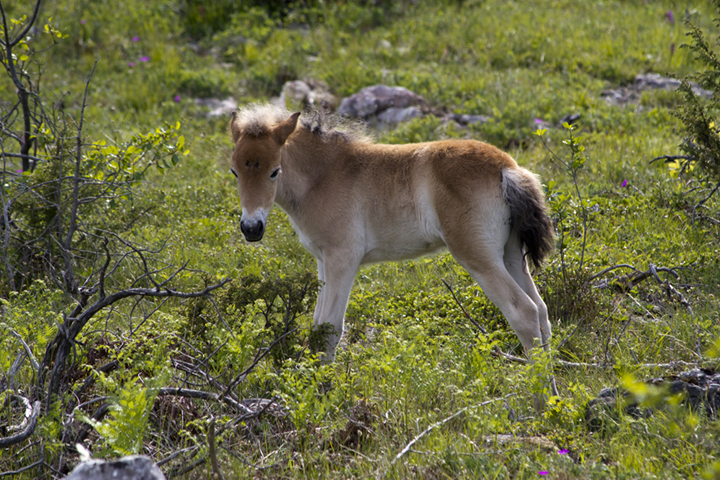 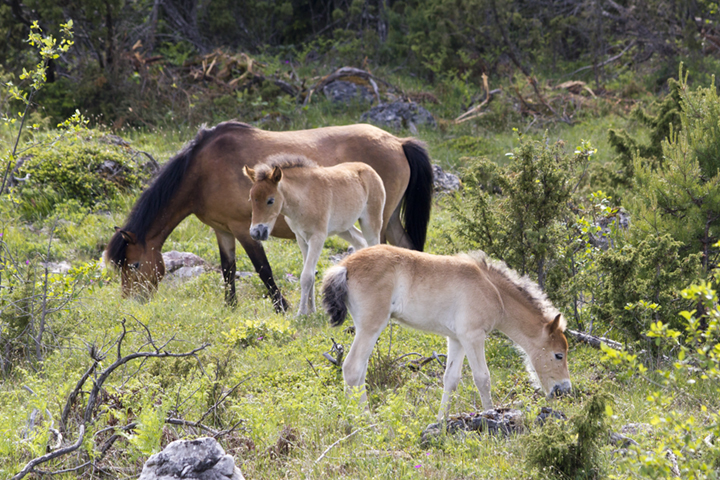 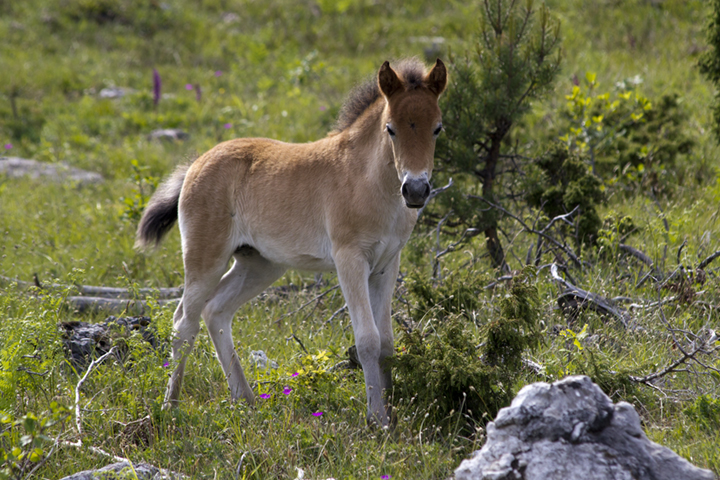 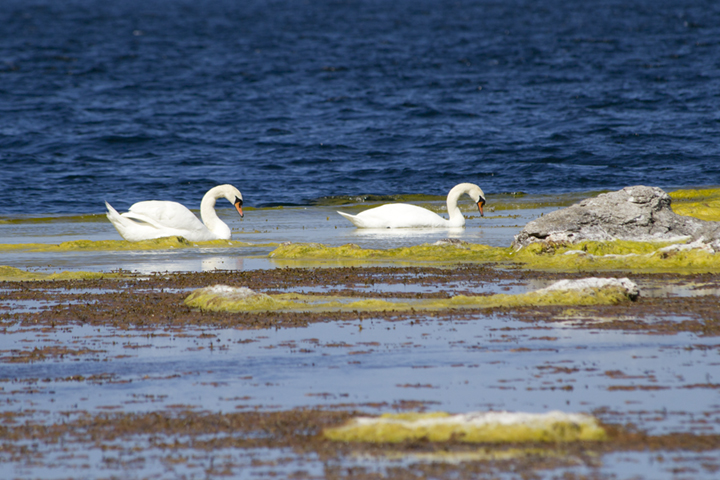 Two of the many Baltic swans 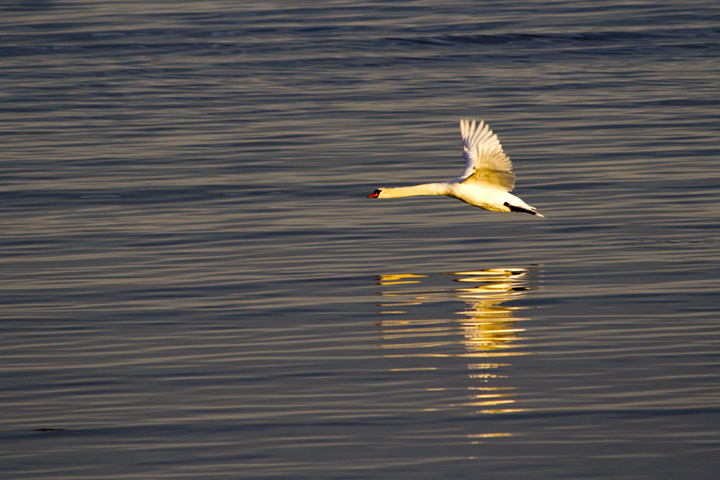 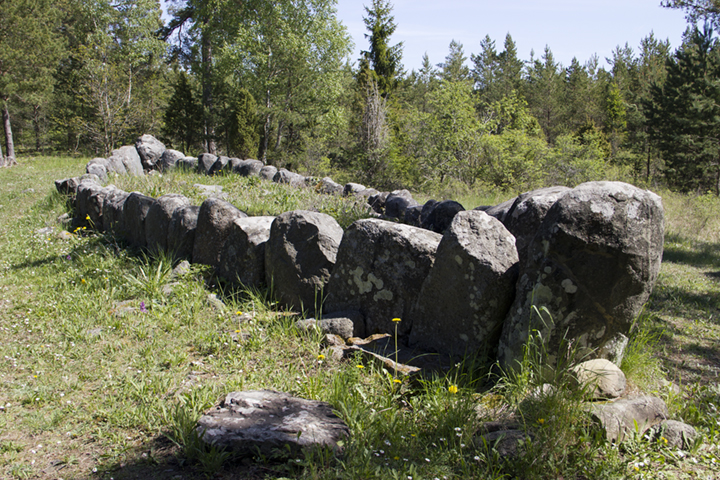 Tjelvar’s Grave – the stone ship setting of Gotland’s first resident, subject of a video we made on Gotland’s creation story, and its geology. 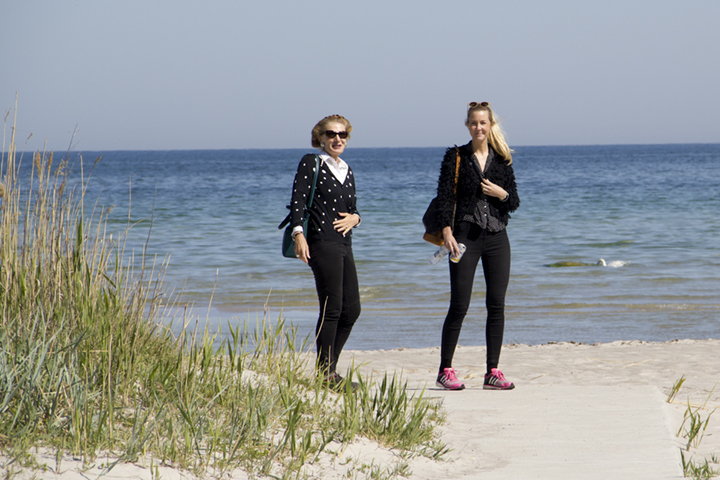 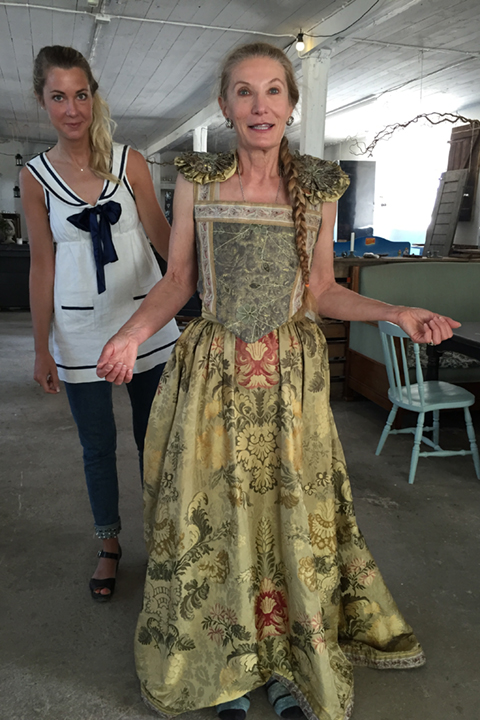 Finding a great costume to buy from the Shakespeare Company at Roma costume sale. Liv laced me up, and I brought it home. 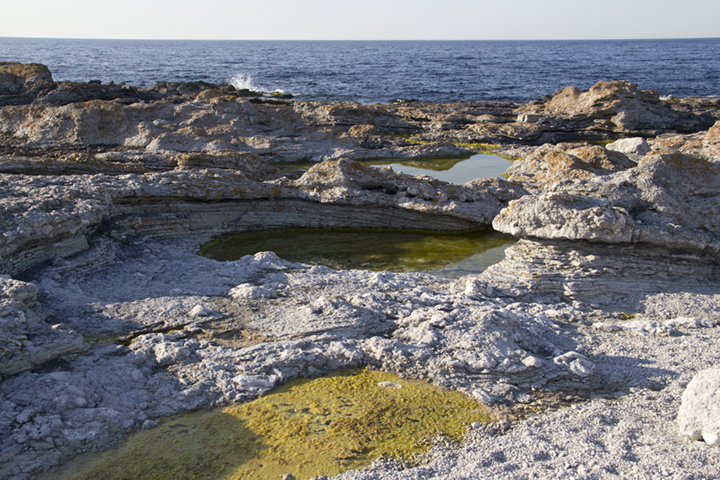 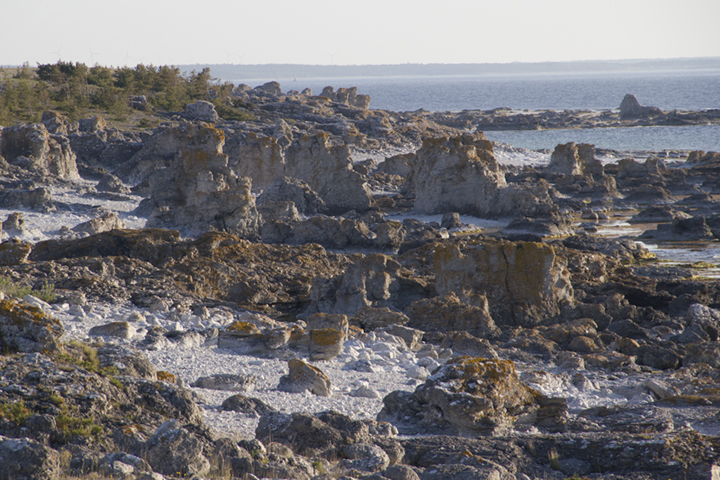 Walking on the beach, Fårö. 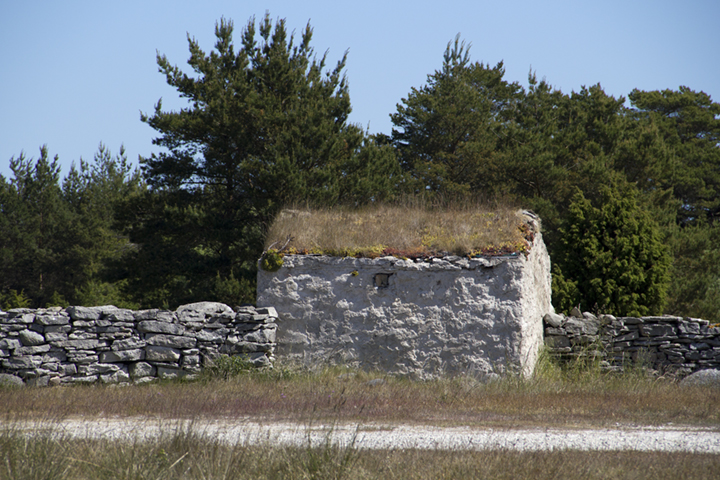 The abundant stone is used in every practical way.

Working on Book Six in the garden at Ängen, the house I was fortunate enough to live in. The lilacs ringing the garden are heavenly…

How grateful I am to all who made this experience so productive, creative, and magical for me.

Previous post: Tindr is here – Book Five in The Circle of Ceridwen Saga

Next post: Now on Audible: Book One of The Circle of Ceridwen Saga