I admit I went to Dublin to see three exquisite pieces of Irish workmanship, the Book of Kells at Trinity Library, the Tara Brooch, and the Ardagh chalice. (And they did not disappoint!) I knew the National Museum of Ireland, Archeology, on Kildare Street also housed remains of Dublin’s Viking past. Nothing prepared me for the treasure trove of Norse weaponry, jewellery, and everyday artifacts in this superb collection. 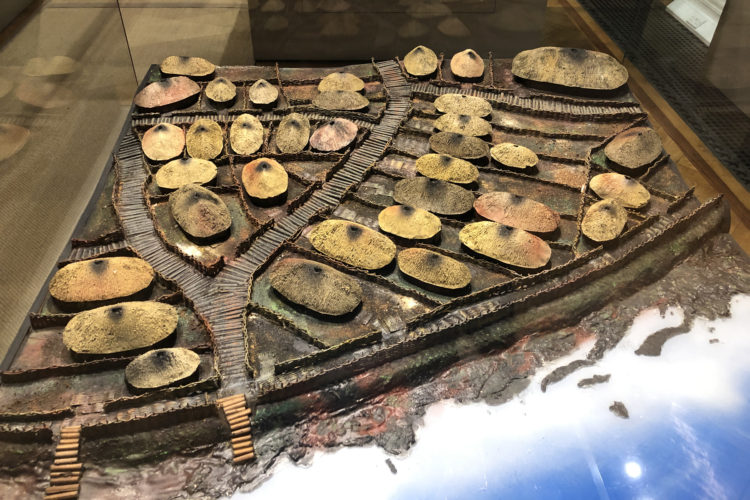 Model of Viking era settlement at Dublin. “Dubh linn” means “black pool” in Irish, a tidal pool where the Norwegians first landed on the Liffey and set their camp.

Raiders from Norway chose Ireland as their target for pillage, just as it was raiders from Denmark who struck the Anglo-Saxon kingdoms in Angle-land – England – to Ireland’s immediate East. Dublin lies on the East coast of the island of Ireland. The River Liffey provided all the Norwegian seafarers needed to access the indigenous settlements already established there. Norwegian Vikings effectively founded Dublin in 841, using it first as an over-wintering camp. It grew to one of their most active trading centres, handling the usual range of goods the far-travelling Scandinavians had access to: prized amber from the Baltic, silk from the near East (carried up the trade rivers of modern-day Russia), Saxon jewellery and coal, woollen goods, walrus tusks and hides from the Arctic Circle. Under the Norse, Dublin also grew to become one of the great slave centres for their trafficking in human flesh.

Over one hundred fifty hoards have been found from Viking Era Ireland, comprising mostly silver and bronze items. Along with the burial goods these folk were consigned to their graves with, and accidental losses now recovered, rich and diverse material remains provide vivid glimpses into the ways these mostly Norwegian raiders both changed and were changed by the Irish they settled amongst. 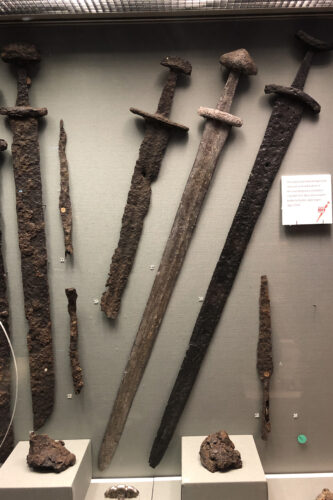 Swords and spear points. Nearly all of the recovered weapons show signs of Norwegian manufacture. 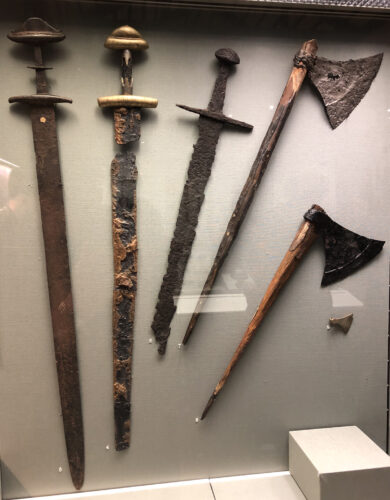 Swords, and skeggoxes. Also on display was a human skull, with a head injury frighteningly identical to that I describe as killing Yrling’s right hand man Une in “Sidroc the Dane”. You’ll forgive me for not photographing it; it was too terrible to look at. 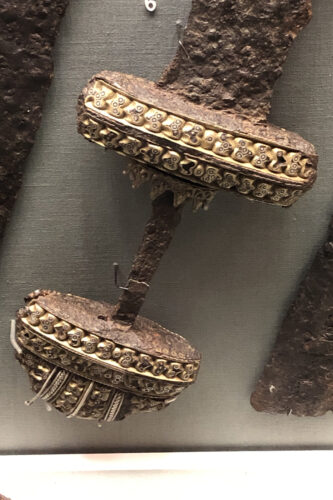 Gold dressed hilt on elite warrior’s sword. Only a very rich war-chief would have carried this. Surpassing beauty.

The Viking incursion into Ireland meant a huge influx of silver was carried into the island – silver dirhams and Kufic coins from trade originating in Islamic lands, and masses of hack silver (broken bits of jewellery, coin fragments, slices cut from simple silver rods) brought as booty from pillaging targets along the shores of Frankland.

Irish workers in precious metals, already amongst the most highly skilled on Earth, where quick to adopt Scandinavian motifs into their work. Great penannular pins and brooches featuring bosses, thistles, kite-shaped pins, arm rings, and silver mesh work appeared for the first time in Ireland, adapted from Norse models. 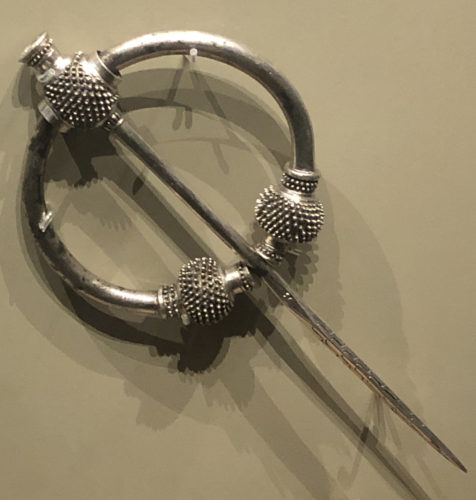 Thistle brooch. I has so thoroughly associated this motif with Scotland and Ireland that to learn it was actually carried from Scandinavia was an eye-opener. 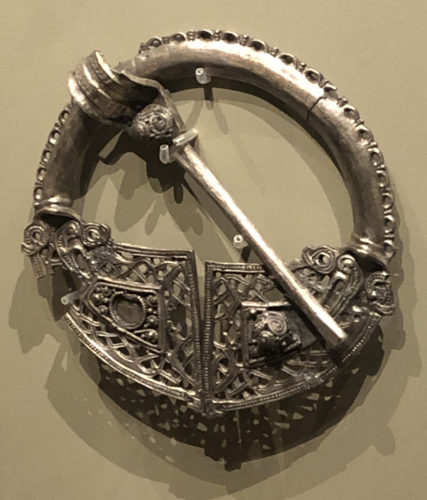 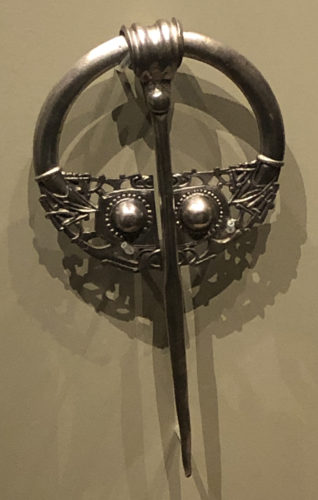 Penanualar pin with bosses, another style unknown to the Ireland before the Vikings. 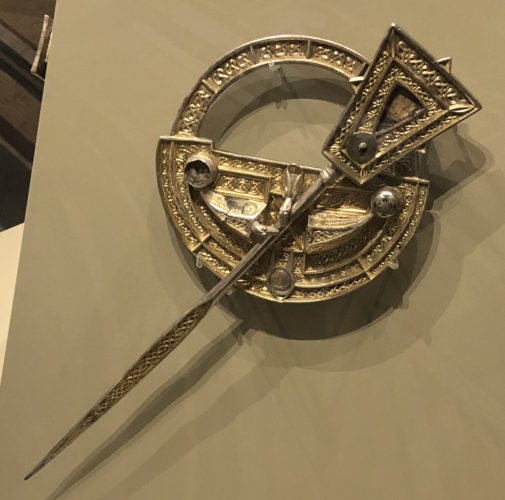 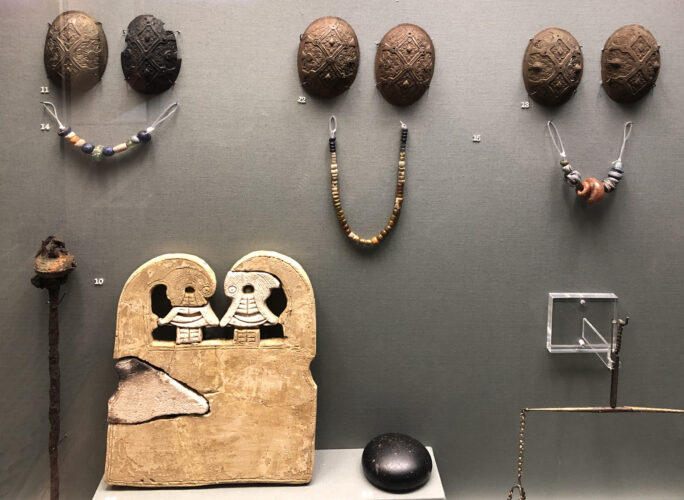 These warriors brought their wives with them at some point. Typical Norse paired shoulder brooches of bronze, from which glass bead necklaces were strung, from female burial sites. 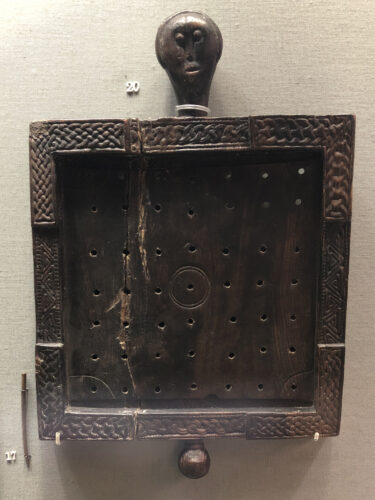 Time for relaxation. A superbly preserved wooden tæfl board game, also known by the Old English name cyningtæfl – “king’s table”. Many, many game pieces of wood, bone, and amber are also on display, all with tiny pegs to fit into the drilled holes on the board.

The anaerobic nature of Irish peat bogs has yielded many finds of organic materials in a high state of preservation. I had seen the stray 9th or 10th century shoe on display at Jorvik or the National Museums of Denmark or Sweden; here was a whole array of them, along with leather shoulder bags, water (or ale/wine) bags, and a jaw-dropping leather knife scabbard. 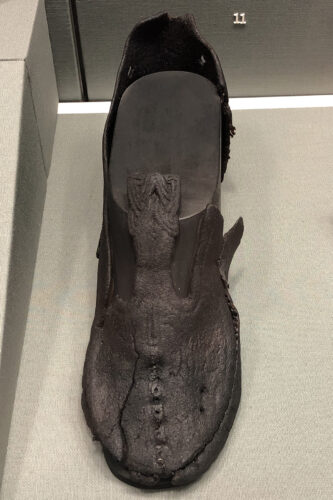 Shoe. Note the detailed interlace on the instep tongue.

Leather knife scabbard. Sublime example, thanks to preservation in peat.

All photos taken in the exhibition halls of the National Museum of Ireland, Archeology, Kildare Street. I am very eager to return – I felt I could spend a week poring over this collection, and a docent told me it is but a fraction of what is held in storage!

Previous post: The Next Saga Book Arrives in April (& how to get there first…)