Many of you have seen the recent conclusions of DNA testing affirming that a 9th c burial at Birka, Sweden with weaponry was indeed that of a woman. It is an exciting and eye-opening report. Let’s consider what these weapons might really mean for our understanding of our fore-mothers.

This grave, known as Bj581, is one of 3,000 known burials at Birka, an important Viking-era trading post. Birka was abandoned in the early 10th century, as rising land levels made the water channels to it unnavigable. (Rising land levels, you may question? Yes. The Polar ice cap that extended all over Scandinavia in the last great Ice Age was so vastly thick and heavy that the land is still rising in many areas – as Gotland is, in the Baltic.) Thus the site of what was once a thriving trading post at Birka was left relatively untouched; traders could no longer reach it on their ships. The grave Bj581 was a particularly rich one, and has been well documented. All except for its inhabitant.

Two scientists making careful study of the remains have finally established the sex of the inhabitant of Bj581. A rigorous examining of the skeletal remains of pelvic bones and jaw by bioarchaeologist Anna Kjellström at Stockholm University pointed firmly towards a female verdict. Then at Uppsala University archaeologist Charlotte Hedenstierna-Jonson extracted two types of DNA from the bones. This burial was indeed that of a woman. 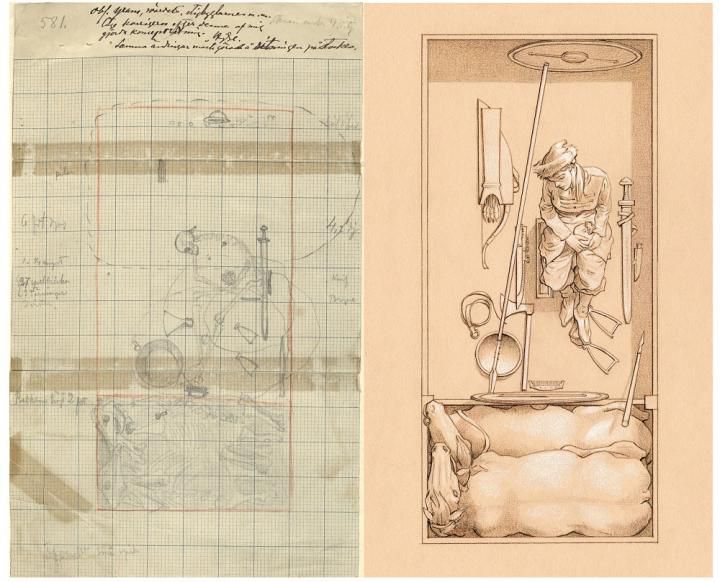 This reconstruction of the grave site shows how the woman may have originally looked.
(Þórhallur Þráinsson ©Neil Price)

It is certainly true that faulty attributions of grave inhabitants have been made over the centuries. Lacking complete skeletons (or in the case of cremation burials, any skeletons) grave goods could lead archaeologists and scholars to false ends. (The Birka find, though quite complete, was excavated in the late 1880’s). If cooking implements were found, an assumption of a female grave might be made, completely overlooking the fact that male traders and raiders had to self-cater, and carried these things with them. The Birka grave held a sword, battle axe, spear, shield, arrows, and two sacrificed horses (mare and stallion, so they might increase in the afterlife) – and the body of a woman. (Also, on her lap – signifying her role as tactician, or as a more playful touch – gaming pieces from tæfl, a strategy board game you might recall from the Saga.)

Another interesting fact is that she was quite a tall women by her standards – 5’5”. A mass grave site in England of Danish warriors and their Danish wives – victims of contagion – tells us the average Danish Viking was about 5’7”, and his wife 5’1”. So this women, of about 30 years of age, so nobly sent to the afterlife, was rather a commanding figure at her height.

Was she a true warrior? It is certainly not impossible. Other weapons and artefacts of kingship have been found in women’s graves in the past. We have (not always reliable) accounts from Christian historians, Saxo Grammaticus for one, who about the year 1200 shares the story of the woman warrior Lagertha, eventually wed to and divorced from Ragnar Lodbrok, who with a number of other fighting Danish women, Saxo compares to Amazons.

Why would a woman be buried with such weapons, if she was not using them? One must remember the tremendous material value and ritual significance of weaponry, in both Anglo-Saxon and Norse culture. Even onlookers were aware of this; the Roman historian Tacitus, in his report Germania, notes that woman not only could receive weaponry as a dowry, but were expected to preserve and protect it for coming generations. (We see a glimpse of this in Modwynn, the Lady of Kilton, where in Silver Hammer, Golden Cross she presents her dead husband’s war-kit to her grandson, Ceric.)

So who was this woman, buried in Birka, with such great war trappings, fully worthy of a hero? It is tempting to imagine her as one who wielded these weapons with honour and courage, and with success.

But let us temper our enthusiasm for this vision with the grim realities of warfare, and the physiological differences in size and strength between men and women. If it is true that the bodies of dead women warriors were found amongst Germanic tribes warring against the Romans, they were likely fighting out of real desperation, and were not normal troops. Woman just can’t fight in hand to hand combat with men and have any real chance of survival. 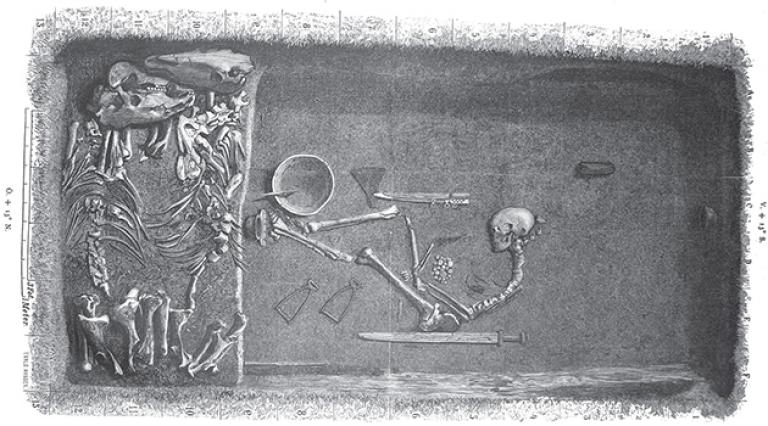 Illustration by Evald Hansen based on the original plan of the grave by excavator Hjalmar Stolpe, published in 1889.
Illustration courtesy Uppsala University

The great levellers are archery, and horses. (This, in fact, is where the formidable Amazons come in.) Men and women fighting each other with bows and arrows on horseback is a much fairer contest. Women on horseback with bows can inflect great damage on ground troops, as it is hard to withstand repeated onslaughts of arrows; one can’t advance, and one can’t open the body enough to fling a spear, if the enemy comes within range.

We may never know how the Birka Woman used her weapons, but I admire her for having them. But I myself shall be astride my horse, bow in hand…

Previous post: How the Saga Audio Books are made

Next post: The Next Saga Book Arrives in April (& how to get there first…)