Reykjavik itself is a most attractive city of 170,000 in its expanding metropolitan area (total population of Iceland is about 230,000). There is a great deal of imaginative modern architecture done by a number of skilled designers; corrugated sheet metal is applied to the exterior of buildings either horizontally or vertically and painted or enameled bright hues to happy effect. Hot water and steam heat, generated from water mixing with sub-surface magma, is very inexpensive and delivered via geothermal pumping stations coursing 95 ºc water. The Summer Solstice temperature outside ranged from 9 ºc to a pleasant 14 ºc. 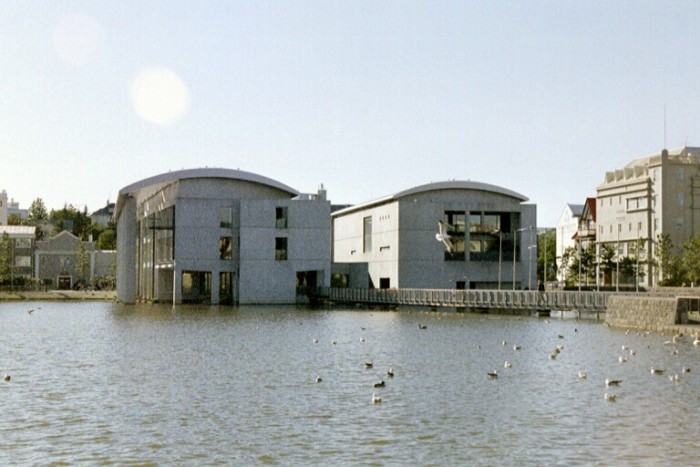 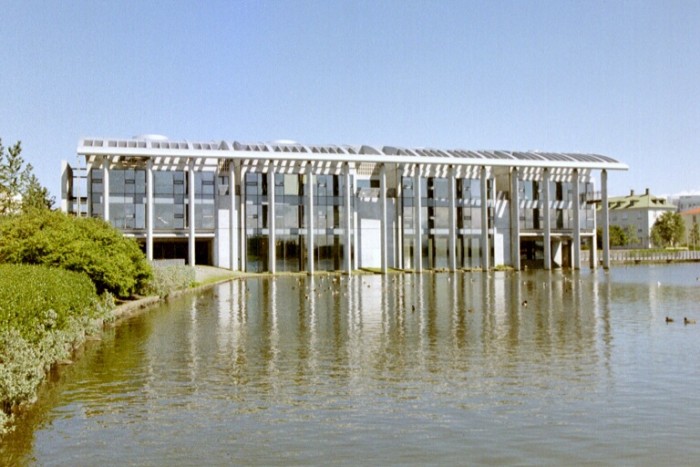 Reykjavik City Hall, designed in 1986 by the architects Studio Granda. This striking governmental complex is sited on the Tjörn, the lake in the heart of the city. Inside is a massive relief map of all of Iceland.
Prev|Next 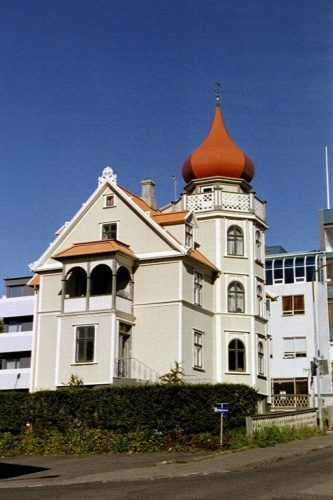 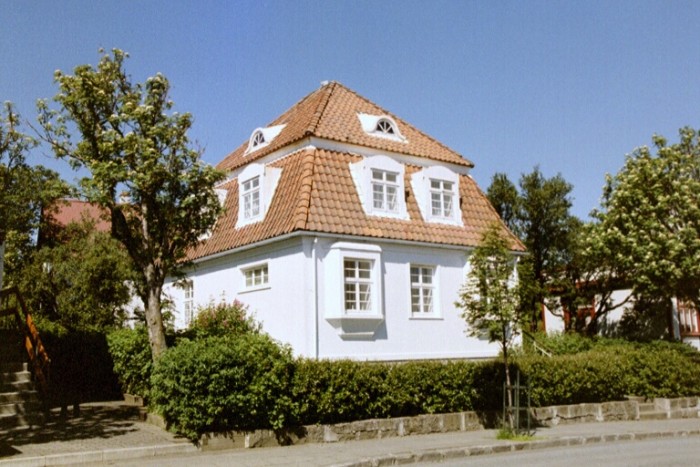 A variety of residential options in Rekyjavik. The first house, with the red dome nicknamed “Næpan” (The Turnip) was built in 1902 for Magnús Stephensen, governor of Iceland. Many of the houses are wood frame covered with corrigated metal siding, and show unique and imaginative detailing. The large family home in the second row, middle frame, is another fine example of contemporary Icelandic architecture. The final photograph shows a large and handsome multiple family dwelling on the waterfront.
Prev|Next 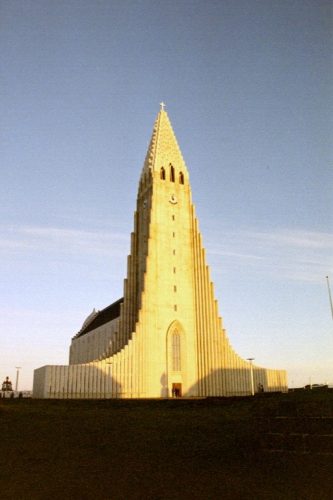 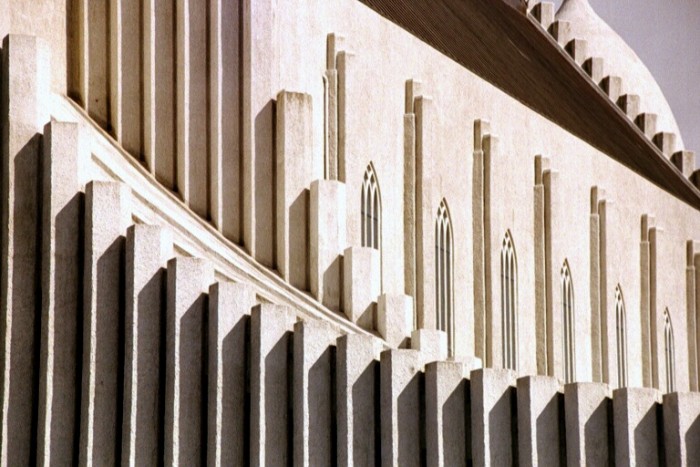 Hallgrimskirkja, the cathedral of Reykjavik, begun by State Architect Guðjón Samúelsson in 1937 and consecrated in 1986. The curving sweep of its clustered concrete columns and an interior view.
Prev|Next 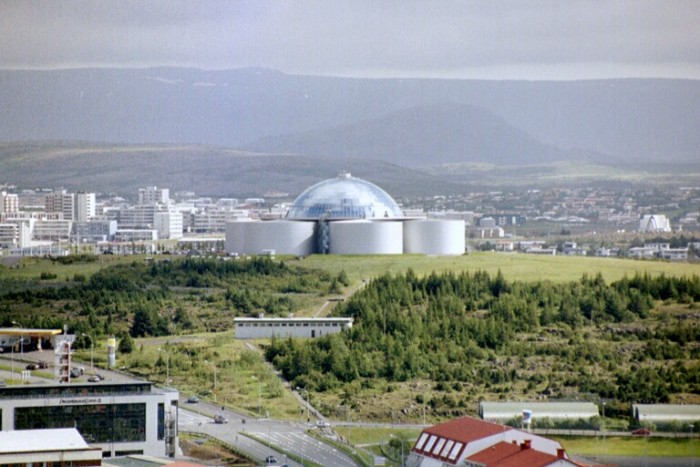 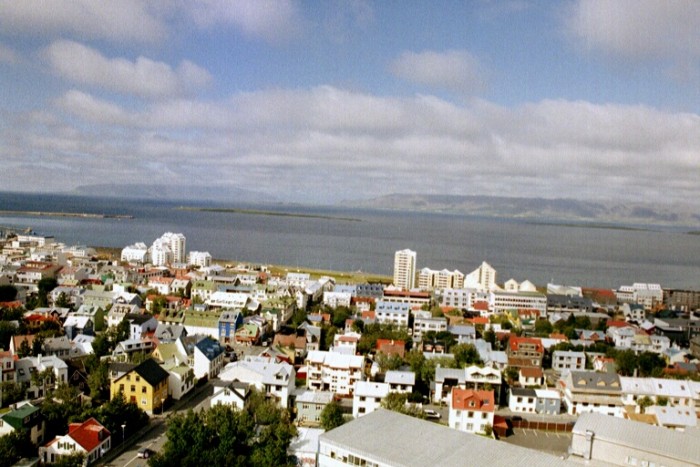 Views from Hallgrimskirkja belltower. Pearlan (The Pearl), designed 1985-91 by architect Ingimundur Sveinsson for the Reykjavik District Heating Utility. The dome, housing a luxurious revolving restaurant, sits atop six 10 metre aluminium clad steel tanks used for water storage. Three views out over the city of Reykjavik setting the diversity of the building stock against the dramatic natural background.

We stayed at the Hotel Holt, a member of the Relais & Chateaux family of hotels. Our suite was very well furnished and comfortable, and the hotel itself is decorated with original Icelandic art. The Holt features a fine breakfast buffet with an assortment of herring, cheeses, excellent breads, eggs, fruit, cereals, the Icelandic specialty dairy product skyr (similar to non fat thickened yogurt or the German cheese Quark) and the most delicious butter ever tasted. (In fact, one early settler proposed the name Butterland for the country as he said he felt the grass was so rich that it almost dripped butter.) One aspect of the Holt breakfast buffet that I found especially pleasing was the opened bottle of champagne upon the buffet table. This sat next to a bottle of cod liver oil and a row of shot glasses, if one was feeling particularly virtuous. (One was not.)

Á næstu grösum or One Woman Restaurant, downtown at Laugavegur 20b, offers delicious, wholesome and ever-changing vegetarian food for lunch and dinner. (354 552 8410)

IcelandExcusions leads a vast variety of tours around Iceland, all led by skilled and personable guides.

Birna Þórðardóttir offers interesting and unusual personalized tours by foot of Reykjavik, specializing in unique and out of the way places. She can focus on cuisine, architecture, bookstores, design, or any other topic that piques your interest. Contact her at Cultural Companion Birna at info@visitreykjavik.is or ring her on (354) 862 8031 or (354) 552 1570

The Insight Guide to Iceland was my guidebook, and highly recommended.

While in Reykjavik I purchased the five volume Complete Sagas of Icelanders , Leifur Eiriksson Publishing, 1997. This carefully produced boxed set features meticulous English translations and the highest level of scholarship. It is not a purchase for the faint hearted (about US$300) but for those truly interested in the Sagas it is certainly the next best thing to reading them in Old Norse.

I also recommend two fascinating books I read prior to my trip, A Piece of Horse Liver: Myth, Ritual and Folklore in Old Icelandic Sources (1998) and Under the Cloak: A Pagan Ritual Turning Point in the Conversion of Iceland (1999) both by Jón Hnefill Aðalsteinsson, published by the University of Iceland. The former treats various aspects of the Old Norse religion, centreing around worship of the fertility God Freyr. The later deals with the conflicts and compromises occasioned by the adoption of Christianity at Þingvellir in 1000.

Go to Huldufolk – the Hidden Folk, and Trolls
Go to Introduction and Table of Contents