Summer Solstice in Iceland: A Tiny Bit About Icelandic History

Iceland was settled in 874 by a hardy band of prosperous farmers seeking to escape the long arm of the tyrannical King Harald Hairfair of Norway. Some of the settlers who crowded the original ships were Norwegians, but others were of Norwegian descent long resident in Ireland and the British Isles. Amongst them were Celtic slaves and servants, who of course contributed to the bloodlines of the new Icelanders. The Icelandic text Landámabók, the Book of Settlements, lists 400 of the founding families of the new country, 38 of which had been powerful chieftains in Norway.

But the settlers did not find the new land completely uninhabited. A small number of Irish monks, seeking complete peace in which to worship their God, had preceded them. Finding their solitude shattered, the monks (“papa”, priest) were unwilling to live amongst the newcomers, and according to an early annal “went away”. It is not known whether they set out westward in their hide coracles, or what became of them, but they are recalled throughout Iceland today in place names such as Papey, an island in the east fjords. Although a few of the settling families were Christian upon arrival, their Christianity fell away within a few generations.

Rejecting kingship, Iceland was founded as one of the earliest republics. Individual chieftains, who were after all land owning farmers first, were known as goðar, from the word for God. The areas they controlled were known as Þings, (“things”, for more about this alphabet letter called Thorn) and the great yearly meetings, or parliament, known as AlÞingi, was first held in 930. This convened at one of the country’s most remarkable natural sites, Þingvellir at the collision point of two continents, for this is where the North American tectonic plate meets the European plate. All great decisions were made here, and it was at Þingvellir that Christianity was adopted en masse in the year 1000.

Without one ruling family the country was continually torn by internecine strife amongst competing chieftains, often escalating to disastrous levels of bloodshed reaching across successive generations (and inspiring many of the greatest Sagas). The republican ideal came to an end in 1262 when the AlÞingi granted King Hakon of Norway the right to collect taxes. Denmark took over rule of Iceland in 1397 as part of Queen Margaret of Denmark’s new Kalmer Union of Norway, Denmark and Sweden. Far-away Iceland was promptly forgotten, and when it was remembered it was only to enforce the most punitive of trading restrictions on its destitute people. Long centuries of famine, plague, piracy, and nearly unremitting hardship followed. Although there were many previous attempts, Iceland did not become sovereign again until 1918. It was still however linked to Denmark under their common king. It took the isolation imposed by WWII that allowed Iceland to finally break free of Denmark, and the present republic was formed in 1944.

Nearly all Icelanders live around the coastline of their country, with approximately half of the nation’s 230,000 citizens living in or near the capital of Reykjavik on the Southwest coast. The second largest city, Akureyi with 15,000 people, is on the North coast. Much of the interior is technically a cold desert, uninhabited and uninhabitable, punctuated by several large glaciers. The interior is famously so rugged that the American space agency NASA used it to train the astronauts destined to make the first Moon landings. 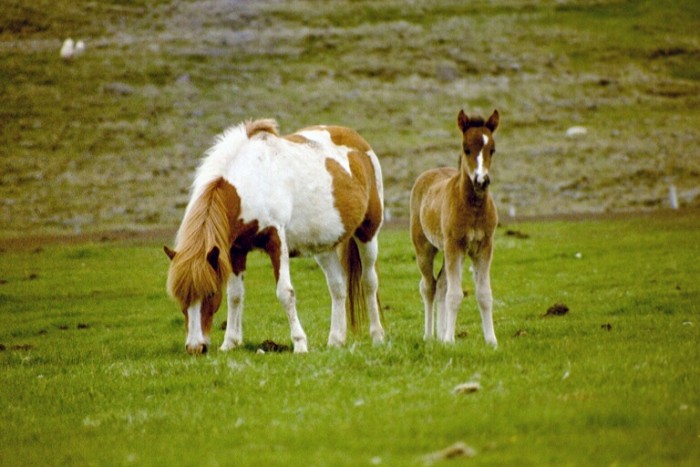 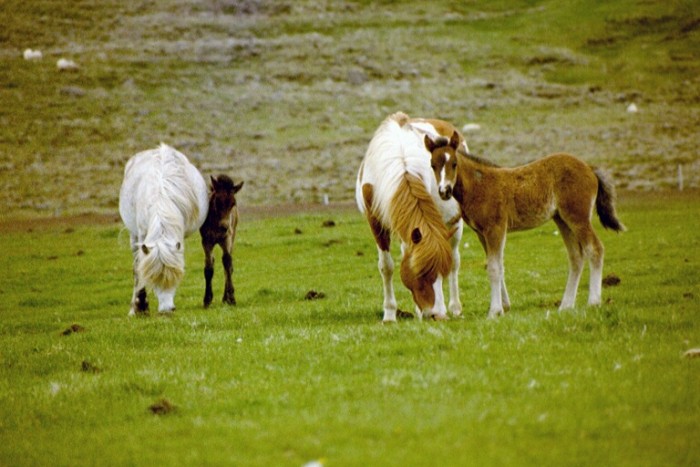 A rugged landscape requires rugged horses. The sure-footed and hardy Icelandic horse roams freely over the countryside. They average only 13 hands in height but the strength in their short backs allows them to carry large men long distances without tiring. (The American pugilist George Foreman owns several on his Texas ranch and is amongst their international enthusiasts.) To keep the bloodlines pure and guard against disease, no Icelandic horse that leaves the country may be re-admitted, and no other horses have been allowed in for centuries. The Icelandic horse naturally possesses four gaits: fetgangur the walk or step, brokk the trot, stökk the gallop, with its variant valhopp, a canter, and the distinctive gliding tölt, a smooth running walk. A percentage of Icelandic horses can be trained to a fifth gait, the skeið, or pace, a forceful and very fast two beat passage gait. Driving through the countryside we passed a small group of equestrians riding at the tölt and were most impressed at the smart racking actions of their steed’s feet.