Summer Solstice in Iceland:
In the Saga Country

Sunday 23 June
Sunday was reserved for a ten hour guided “Viking” tour up the Snæfellsnes Peninsula. Our driver/guide was a charming Icelandic young woman, Soffia Alice Sigurðardottir of IcelandExcursions. We headed North from Reykjavik via the new 6 km. tunnel under the mouth of Hvalfjörður (Whale Fjord) to the town of Akranes. Across the narrow Borgarfjörður we came to the town of Borgarnes. Nearby at Borg we saw the burial place where Egill Skallagrimsson, a particularly bloodthirsty and interesting 10th century character who was not only brutally violent but a tremendously gifted poet, laid his beloved son, in the burial mound in which his own father lay. The son of a berserker, Egill killed his first victim in a dispute over a ball game when he was only eight years old, an act which led his mother to fortell a rich and interesting career as a Viking ahead of him. He is the central character in Egills Saga, one of the most important and entertaining of all Sagas, thought to have been composed by his descendant the great Snorri Sturluson. 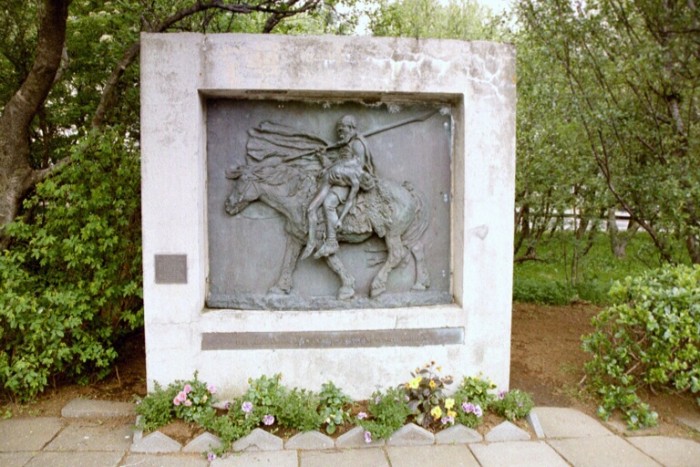 Three views of the monument honouring poet and warrior Egill Skallagrimsson. The sculptor was Ásmundur Sveinsson (1893-1982) 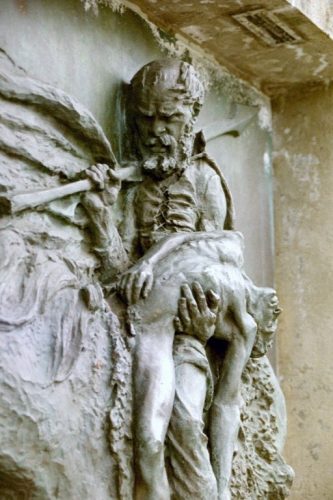 From there we headed though the dale country of Snaefellsnes and along the beautifully soaring coast of the Hvammsfjordur to Eirik the Red’s farmstead in Haukadal (Hawk Valley). In Eirik’s lifetime the water level is supposed to have been higher, so that he could have sailed his long boat nearly to his front door; today it would make a very long portage between the end of the Hvammsfjordur and the narrow lake that fronts Eirik’s property. Eirik was repeatedly outlawed for the crime of murder, first in Norway, which drove him to Iceland, and then twice again in Iceland, which prompted him to sail West and found the Icelandic colony on Greenland. It is important to understand just how serious being “outlawed” was; an outlaw lost all his property and his children were declared illegitimate. Such a decree forbade any law-abiding folk from assisting the outlaw, and rendered anyone who killed him immune from prosecution. It was in effect, a death sentence, but few have turned it to so much advantage as Eirik did, for it fueled his wanderlust and spurred him to discovery. He remained heathen all his life but his wife Þjoðhilður not only became Christian but had the first church built in Greenland. It is their son Leifur the Lucky who was the first European known to land on North American shores. 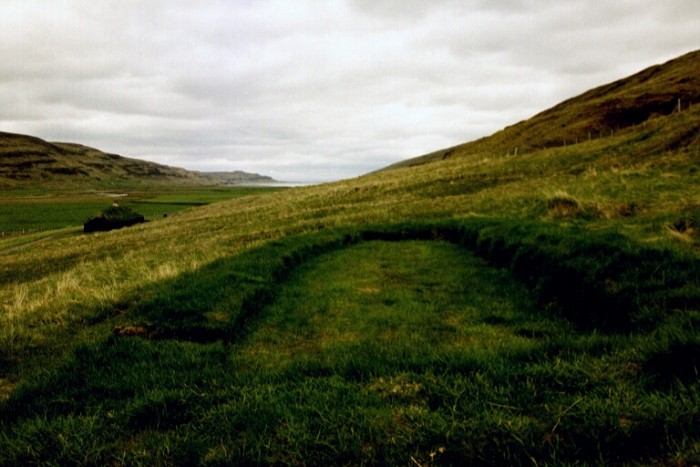 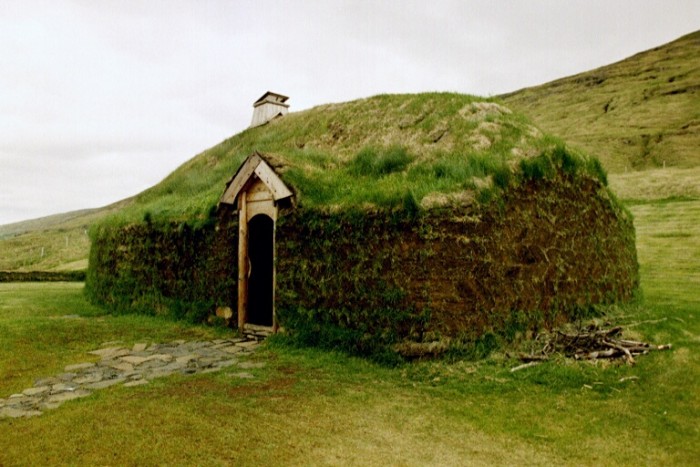 The outlines of Eirik the Red’s turf farmhouse in Haukadal. It had a central fire pit and a ledge for seating. The walls were of cut, stacked turf on a rock foundation and were about 1.5 m or 5 feet thick. It was likely occupied for only ten or twenty years. The recreation of Eirik’s farmhouse, about 100 m away from the site of the original, with the same view of the narrow river before it. Costumed interpreters greet visitors and tell of 10th century Icelandic life. Two views across the narrow valley from Eirik’s homestead.

We next visited a number of the sights connected to the greatest figure in Icelandic history, Snorri Sturluson (1179-1241), a chieftain and scholar/poet who wrote down many of the Sagas for the first time and also composed a unique book of instructions for skalds (Norse bards) known as the Skaldskaparmal as he realised the old oral traditions were fast disappearing. We visited several of the farmsteads he lived at, the church in which he was wed, his famous geo thermal hot pool at Reykholt in which he bathed. I stuck my hand in it; it was deliciously warm.

Nearby is a boiling one in which he cooked his meat. Needless to say I did not test the temperature of that one. 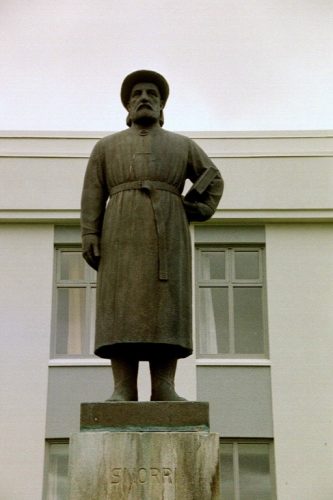 Norwegian sculptor Gustav Vigeland's statue of Snorri Sturluson guarding the door of his Institute. There is now an interesting museum at the site of Snorri's house, and the Institute accepts visiting scholars from around the world for further study. 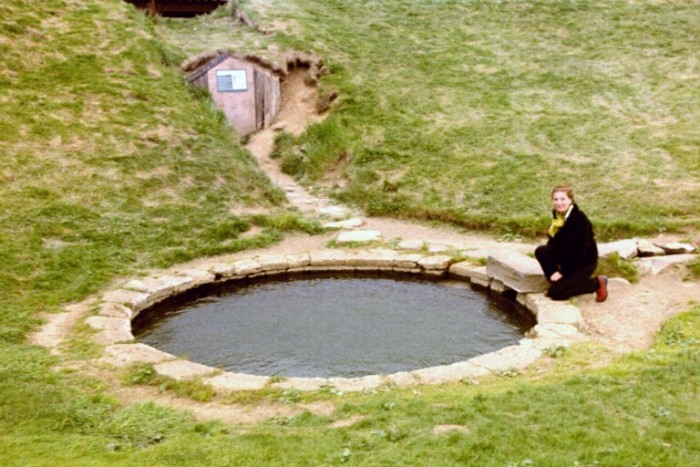 Octavia testing the waters at the Snorralaug, Snorri's hot pot.

The rushing torrent passing under Bjarnbridge, site of a former natural stone bridge.

Octavia standing on the hillside above the cascade; note the large number of runic inscriptions carved into the rocks beside her.