Part of the University of Iceland, the Árni Magnússon Institute holds the priceless treasures of the majority of the Sagas, Eddas, and other early manuscripts which records so much of early Norse history. Árni Magnússon was an Icelandic scholar born in 1663 who dedicated his life to finding and preserving the earliest documents of his country. Since Iceland was under Danish rule during Árni’s lifetime and lacked its own university, those wishing to be educated commonly went to Copenhagen, and Árni followed suit, eventually becoming an archivist in the Danish king’s private archive and a professor at the university. Árni Magnússon left his collection to the University of Copenhagen before his death in1730. The majority of these documents, over 1,800 of them, were returned to Iceland by the Danish government by an act of parliament passed in 1961, with the first manuscripts arriving ceremoniously in Reykjavik on 21st April 1971. The collection includes a vast array of calfskin vellum and paper documents, from law codes compiled as early as 1120, histories of Iceland and other lands, collections of saint’s lives, the vividly engrossing Sagas which relate so many tales, both amusing and tragic, of Icelandic heroes and villains, and four versions of the most famous of all Icelandic manuscripts, the Poetic Edda, which covers the heathen Gods. The scholar and chieftain Snorri Sturluson’s version of the Edda, known as the Codex Uppsaliensis, begins with a history of the Nordic Gods (presented by Snorri as descendents of King Priam of Troy!) and continues with the narrative of how Gylfi, a Swedish king, travelled to Asgard, the realm of the Gods and there hears many strange and wonderful tales of the Gods and their acts. The third part of Snorri’s Edda is the famed Skaldskaparmal (“On Poetry”; recall the Norse name for a scop is skald). Snorri, writing in the 13th century (he was murdered in 1241 on orders from the King of Norway for returning to Iceland) was aware that the skaldic traditions of Iceland’s heathen past were in danger of being forgotten and subsumed by Mediterranean European models of verse. Skaldic poetry shares many of the same attributes as that created by the Anglo-Saxon scop – a reliance on certain words used only in poetic settings, the use of kennings (in Icelandic, kenningar , evocative word combinations representing everyday objects – “whale’s road” meaning sea, “horse of the sea” meaning ship, “heath walker” meaning stag), and a decided cadence created to be spoken aloud as the listeners relax over their ale cups. The extraordinary value of Snorri’s work in this last part is the examples from old poetry that he provides. He ends with an original poem, Hattatal (Compendium of Meters), 102 stanzas of praise to his future executioner Norwegian King Hakon in which he illustrates the use of various traditional meters.

The Árni Magnússon Institute is currently housed on the campus of the University of Iceland, but is moving Fall 2002 to its new quarters at the House of Icelandic Culture in Hverfisgata. A selection of manuscripts is on display at any given time; they are rotated to limit damage due to light exposure. Iceland is proud of its 100% adult literacy, and this enjoyment of reading has been a national characteristic since its founding. (The nation today produces more books per capita than any other on Earth.) Indeed, once the Christian age had begun, children could not be confirmed until they were literate. These ancient manuscripts have been well loved, heavily handled, and cherished by generations of proud owners. Visitors to Iceland in the 17th and 18th centuries tell of entering turf and driftwood homes of almost unspeakable poverty to find within as the most cherished possession a book hoary with age, and family members gathered around it reading in turn. It is no wonder that many of the manuscripts in the collection survive only fragmentarily, or in a few leaves bound in with other unrelated materials. Of the 30 or so documents on display during my visit some had darkened to an almost chocolate hue, yet the rounded, firm hand of the black-inked text still stood out boldly upon the vellum. Some of the manuscripts are beautifully illuminated in a broad array of colours. Others were written on vellum so ill-prepared that the text is written around holes and tears in this costly material. All of it is thrilling to contemplate. I spoke with the curator on duty and asked him about what I had read – that Icelanders still regularly read the Sagas. He told me this was true; beyond the fact they are required reading in schools the Sagas are still read for pleasure. The language difference through all these centuries is slight – he compared it to a native English speaker reading Shakespeare. Contrast this with English literature contemporary to the Sagas – Chaucer for instance – which of course is quite challenging for a speaker of modern English to read. The great difference over the centuries has been in pronunciation; he said, if I understood properly, that Old Norse has more than twice the sounded vowel combinations than modern Icelandic. (It is interesting to note that this contraction is the same sort of simplification that the runic alphabet in Scandinavia experienced, shrinking from twenty-four characters to sixteen.) Gazing upon these extraordinary manuscripts, survivors all, one feels the especial power that ancient artifacts possess, and exude. 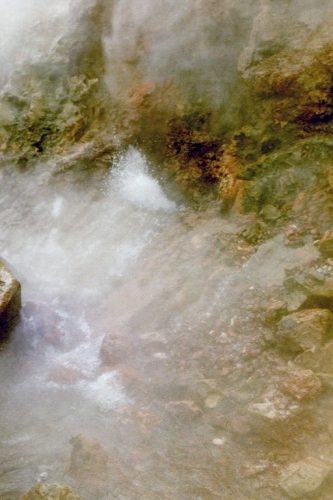 A land of fire and ice. Abundant boiling water breaching the surface of the lava plains has always provided Icelanders with a source of heat against the harsh environment. 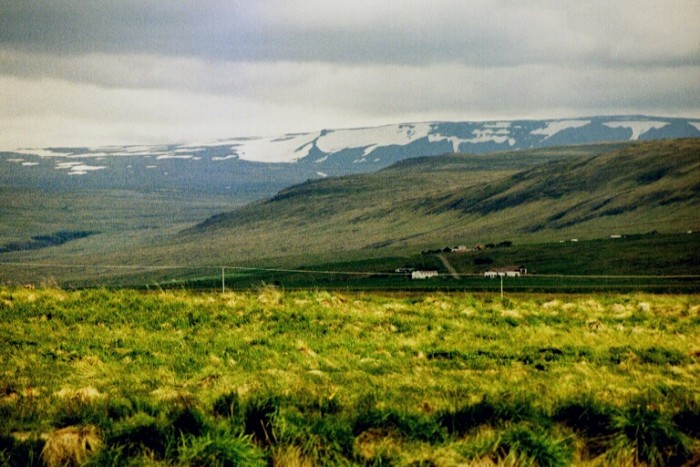 Snow glistens on the top of distant mountains on Summer Solstice day.

Go to Saga of Gudridur
Go to the Saga Country