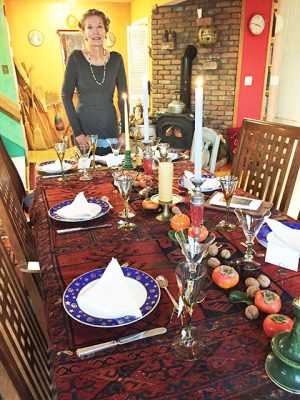 Your hostess welcomes you

One of the great pleasures in life is gathering with friends around a big table. My friends honour me with their presence often enough that freshness and novelty in the menu is prized in both cook and guests. Sometimes I like to build an entire meal from a single cook book, such as Lebanese-American Bethany Kehdy’s wonderful Pomegranates and Pine Nuts, or the incomparable Alice B Toklas Cook Book, by the companion of the fabled Gertrude Stein (and I’m lucky enough to own the first British edition, with the “Haschich Fudge” (sic) recipe included–the infamous entry that was expunged from the American edition…).

Because Martinmas – the Feast of Saint Martin – celebrated on November 11, had just passed, a hearty Fall supper seemed in order. St Martin’s Day is the traditional beginning of the Winter Season, the day when he rides over the countryside on his grey horse, unleashing winter from his billowing cloak – the very same cloak which the young soldier divided in half to clothe a freezing man at the city gate of Amiens. Although Martin was still heathen then his act of selfless charity became celebrated in the early Church. As well as becoming Patron Saint of Soldiers, he is considered an exemplar of compassion. So the idea of “the first dinner party of Winter” was much in my mind. 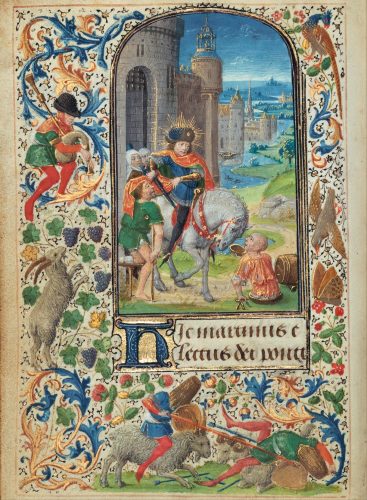 I choose four dishes for my party of eight, doubling recipe amounts where needed. We began with Barley Browis, a thick and nourishing stew with cubed carrots, parsnips, and turnips, and went on to Oat Griddle Cakes, served with homemade applesauce (from a tree by the town wharf which is having a banner year in spewing forth gloriously sweet ruddy apples).

This was followed by the main course, Venison Pie. This is one of my favourite dishes from the Cookery Book(let), no mind that the “venison” I use is seasoned tofu crumbles. The other seven at table who partook, meat eaters all, declared it delicious. The Pie is a good example of the early practice of cooking with ale, used as a moistener, though apple juice is equally effective for those who wish to abstain. It is the seasoning that makes the Pie “game-like” – the woody pungency of a few crushed juniper berries, the astringency of fresh rosemary, the mellow tang of thyme. Venison Pie welcomes any type of crust, and although mine are far less beautiful than those my dear Deborah of Deborah Dishes or Alex made, they are professional cooks. Mine probably looked a bit closer to the efforts Gunnvor, Ceridwen’s cook, or Ceridwen herself would have turned out. Rather than one large pie, I made these in smaller ramekins and had couples share one, a highly authentic medieval touch. 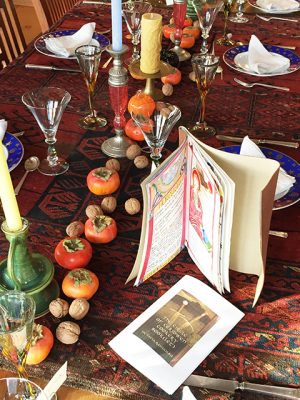 Two versions of the Cookery Book(let)

For pudding there was Lavender-Scented Pudding, garnished with a mixed berry compote. Its delightful fragrance and subtle flavour is imparted by simmering the dried lavender flowers and leaves in milk and then letting it rest on the counter for a few hours. I made it, once again, in ramekins, and they puffed up like little soufflés, their lightness providing a welcome counterpoint to the hearty fare that had come before.

On top of my huge trestle table – the top from a single slab of wood, 44″ wide – I lay an old Turkoman carpet. You have likely seen, in Flemish or Dutch Old Masters paintings, this sort of table covering – a patterned “Oriental” carpet, not on the floor, but upon the table, where all might see and admire it (and up there it was safer from the depredation of dirt and wear). You will remember that Ceridwen has her own precious carpet, taken as booty by Sidroc from the Idrisid slave ship and given to her to sleep on in The Claiming.

This red carpet went on for this first cold weather supper of the year, and will stay on until Spring. I have carpets enough that I can use different ones to vary the look; last year’s was blue. I use a whisk broom to keep it tidy and dust free. And Pyewacket loves it. (As intelligent as she is, she is highly willful feline. There is no surface she can be kept off of. At least during the dinner party she contented herself by basking in front of the wood stove, like a good leopard.) 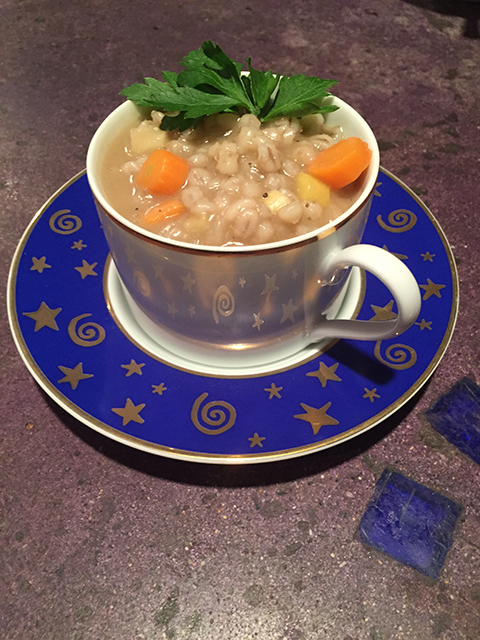 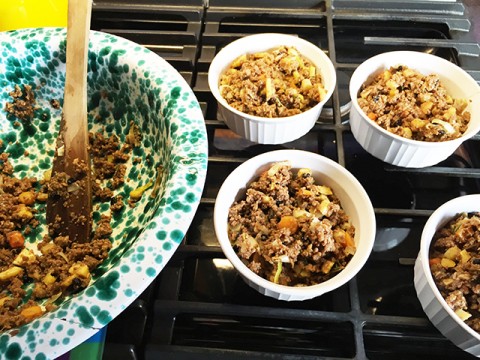 Decorating the table were tapers, including of course, a beeswax pillar candle. All the sweetening in the meal was provided either by fruit or honey, and honey is mentioned repeatedly in The Hall of Tyr, as the character Tindr raises bees. The one element that truly could not have appeared on the table at Tyrsborg was the beautiful array of glowing orange persimmons marching down the centre of the table. These luscious fruits were sent to me, along with vast quantities of in-shell walnuts, magnificent pomegranates, chestnuts, and almonds by a very dear friend who has been blessed by raising these things on her farm in California, and so generously shares her bounty. None of the guests had eaten persimmons before (I assured them their lives were about to change for the better) and all took one home. 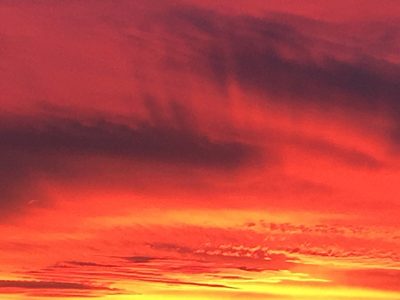 The sky that night!

To drink there was Champagne, a great deal of it, and, naturally, ale. This will explain why – ahem – I can present a few preparatory photos, but not many of the finished dishes; we were all too busy feasting. But to see what the dishes look like at the hands of really skilled cooks, see Deborah’s very amusing recital of the medieval feast she gave, and do look at Alex’s photos. It was a wonderful evening.

Next post: Tindr is here – Book Five in The Circle of Ceridwen Saga