Games and Pastimes of the Anglo-Saxons

An early Boogie-Woogie
Bugle Boy from Company B

All cultures, regardless of how arduous the times they live in, have some kind of sport, games, and pastimes to engage in during leisure hours, and thankfully children have always played. In Anglo-Saxon times (roughly 450 CE to 1100 CE) life was largely lived outdoors for most people, for the continuance of life was predicated on agricultural labour. The interiors of most buildings were dark, smoky, and often cramped, and many tasks whether for livelihood or leisure required the clear strong light of daylight.

Children played with many more natural objects than they do today; a later medieval sermon, which still holds true for the Anglo-Saxon era, mentions children playing

“with flowers…with sticks, and with small bits of wood, to build a chamber, buttery, and hall, to make a white horse of a wand, a sailing ship of broken bread, a burly spear from a ragwork stalk, and of a sedge a sword of war, a comely lady from cloth, and be right busy to deck it elegantly with flowers.” (G.R. Owst, Literature and Pulpit in Medieval England, Oxford, 1961)

Grave finds from early heathen burials contain carved wooden toys such as horses and small wooden boats, tenderly laid to rest with their little owner. But childhood was short for the Anglo-Saxon girl or boy, and girls of five or six were already spending part of their day learning to spin wool, to card fleece, or help with the younger children in the family. Boys tended animals or helped in the fields. Boys also played with small spears and knives carved of wood, learning the arts of hunting and defense at a young age.

Miniature tools sized for a child’s hand have been found, much like children’s sized gardening implements today, but since a child would be more useful at an activity such as egg gathering or sheep tending perhaps such tools were meant as playthings rather than actual implements of labour for young hands. (Although no one pulls weeds better than an industrious six year old.)

Sometimes for adults work and play were mingled. In some villages plough races were held by the men on Plough Monday, the first Monday after Twelfth Night (Epiphany), the end of the Yuletide season.

Not your average little piggy

Physical fitness was obviously of paramount importance to people of all classes – life was hard and demanding, and being physically able to cope with the realities of farming, tree-felling, and of course, battle, could mean the literal difference between life and death. Young men in particular held foot-races, participated in wrestling matches, and practiced the martial arts such as spear throwing, archery, and mock sword play. Those who were rich enough to own horses would have raced them to see whose was the fastest; the Old English epic Beowulf mentions young men doing just that:

“The warriors let their bay horses go/a contest for the best horse/galloping through whatever path looked fair.” (David Breeden translation)

Hunting was not purely sport, as it was relied upon to bring food to the table, but it could be very exciting and therefore enjoyable. Huge numbers of deer roamed the vast forests and marshes of Britain, and provided a good supply of game to those able to stalk and bring them down. Wolves too were hunted as a protection to the flocks of sheep on which so much depended. These intelligent predators nearly suffered the same fate as the bear, hunted to extinction on the island in the 10th century. Boar hunting was hunting of the most challenging kind, and many dogs, horses, and men were killed while trying to hunt this speedy, ferocious, and clever beast.

Good hounds were cherished both as working animals and as companions, and the rich often times made gifts of such dogs. King Ælfred, greatest king of the Anglo-Saxon era and perhaps indeed of any other, sent a brace of fine hounds to the archbishop of Reims. 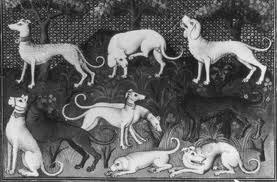 Only the very richest lords kept falcons specially trained to bring down pigeons and starlings and the like. Riding out on horseback and releasing the falcon and watching it swoop down on its prey was a very aristocratic sport indeed. (Many of these falcons were from Viking traders who captured and trained them in Scandinavia, and then sold them to the rich in Britain, Northern Europe, and as far East as Arabia.)

Although most fish were captured in weirs set up in rivers, streams, and narrow ocean channels, line fishing was practiced, and was undoubtedly found to be as enjoyably frustrating as it is today.

The Anglo-Saxons had a great love of ornament on even everyday objects, and men and women spent long hours decorating the spines of wood, bone, and horn hair combs with drawings of animals, embellishing gowns and tunics with gaily coloured embroidery, and decorating leather goods by stamping them with metal dies and burning designs into the surface with heated pokers. The most utilitarian of items such as wooden buckets and dippers generally carried some decoration, even if only simple incised lines or dots around the perimeter. 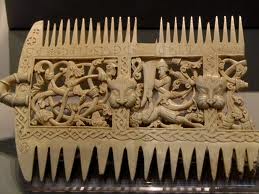 Many of these handcrafts would have been practiced out of doors to take advantage of the good light.

Indoor pastimes included a variety of board games that used little clay and carved markers, and games using dice. Just as today almost everybody enjoyed such pastimes, and our modern word “game” comes from the Old English “gamen”. Dice games were very popular (so popular that even clergy played them) and many die have been found. Betting played a large role in dice games, just as it does today.

The game of tæfl was played on a board using game pieces in opposition. The rules of early games probably varied quite a bit, but many of these games featured a piece which represented the “king” which needed to be protected by the other pieces.

The stunning contents of a grave of an Anglo-Saxon prince or king (possibly of King Sabert who died in 616 CE) discovered near Southend in Essex in 2003 and known as the Prittlewell Find contained 57 gaming pieces carved of bone and two very large dice carved from antler. This shows us that games were important enough in the lives of the Anglo-Saxons that they accompanied their owners into the afterlife.

In the latter Anglo-Saxon period, from the 12th century onward, chess (a particular favourite of my own), originally created in India, was brought to Britain. With its war lords, warriors, and horsemen it echoed the battle-driven lives of the noblemen and women who played it. Two forms of chess were played, one quite similar to the challenging intellectual game we know today, and one simplified version which employed dice, and thus introduced an element of luck. 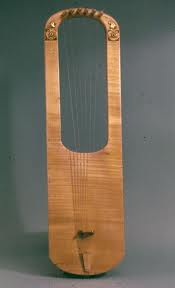 Storytelling, singing and dancing were also part of the long indoor Winter evenings. Harps such as the beautiful one buried with the Sutton Hoo treasure (the burial goods of a great king from about 625 CE, now on display at the British Museum) were played by professional story tellers called scops, but small hide drums, wood pipes and whistles are easily made from everyday materials and were probably played by a wide variety of children and adults. Listening was an active art, and when the professional storyteller or scop began his tale, all turned attentively to him and listened raptly, picturing in their mind’s eye the great heroes, battles, hunts, and religious episodes he sang of.

The love of word-play extended to riddles, and close to one hundred riddles of the Anglo-Saxon period have been recorded in The Exeter Book, a manuscript written about 975, and still kept at Exeter Cathedral Library. Here is one:

“A creature came slinking where men were sitting, many of them in council, men shrewd in mind. It had one eye and two ears and two feet, twelve hundred heads, a back and a belly and two hands, arms and shoulders, one neck and two sides. Say what I am called.” (S.A.J. Bradley translation)

I wish I could Shimmy like my sister Kate…

Can you guess it? The answer is: A one eyed garlic seller.

There was also pleasure to be taken in the simple contemplation of unspoilt nature. A 14th century treatise on the duties and pleasures of a nobleman lists “Watching the snow fall” as an act worthy of his rank, and indeed during Winter when many agricultural duties were suspended and war rarely waged one can also imagine his earlier forbears doing the same.